Tortola Valencia was born in Seville on June 18, 1882. Her father was the Catalan Florenc Tortola Ferrer and her mother the Andalusian Georgina Valencia Valenzuela. Actually, both her birth and her origin is full of mystery partly because the amusement of Tortola in inventing her own history. One time she could be a poor gypsy and in other occasions she makes herself as the illegitimate daughter of a priest or a royal Spanish member. 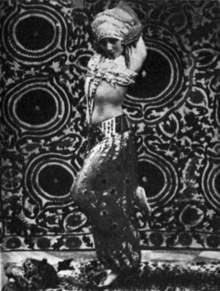 When she turned 3, she traveled with her parent to London, probably fleeing the cholera that hung over the peninsula. In 1889, both her parents migrated to Oaxaca (Mexico) to seek fortune but they died shortly after, leaving Tortola orphan. For unknown reason, she remained in London with an upper middle class family that provided her a complete education. She learned six languages, music, dance, and drawing.

The death of his mentor in 1906 left her in utter ruin. Tortola looked at his options and decided that since the path of getting a married would curtail her freedom, she would dive herself into her bigger passion and vocation: the dance. At this time, she began to designed both her artistic and aesthetic corpus that would cause such a huge impact: the creation of the choreography, the rigorous documentation of other traditions and the costume design.

Tórtola made her first public appearance in 1908 at the Gaity Theatre in London, as part of the show Havana, where she introduce herself as the Beauty Valencia. She did not hesitate to exploit her Spanish origin and charms and the public was fascinating by this new an exotic dancer. She became quickly famous and a year later she conducted her first European tour, which started in Vienna and concluded at the Folies Bergère in Paris. 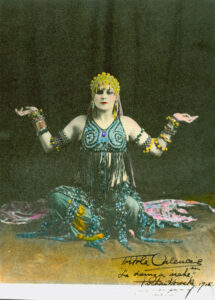 Its passage through the French capital was definitive. She had the opportunity to attend at the performance of Loïe Fuller and Isadora Duncan, and that change her view of performances. Both of them influenced her deeply and she started to create her own choreographs. She greatly combined orientalist dances and costumes with touches of Spanish costumbrism (or folklore). All of it, provided he with a increasingly bigger reputation that captivated European and American intellectual world between 1910 and 1930. She was sensual, mysterious, exotic and very imaginative.

Her Spanish debut took place in 1911 at the Romea Theatre of Madrid. She danced again in Madrid at the same theatre in 1912. In 1913 she began a tournée of Spain, which included the Ateneo of Madrid. In 1915 she performed with Raquel Meller in Barcelona. Tórtola’s artistic originality was understood only by a minority of the Spanish public. While some considered her to be really talented, others thought he dance was more lascivious than artistic. In 1916 Tórtola was satirized by the Catalan humorist weekly Papitu and presented as another Mata-Hari. But in spite of her own recognition that the Spanish public did not understand her art, she kept trying to gain public acceptance on the Spanish stage and eventually she did. Among the many Spanish intellectuals who praised her talent, there were: Jacinto Benavente, Ramón Pérez de Ayala, Miquel dels Sants Oliver, Pio Baroja, Ramón del Valle Inclán. Emilia Pardo Bazán,said that Tórtola was the personification of the Orient and the reincarnation of Salome.

Tórtola was an eclectic and multi-talented artist. In 1917 she acted in the films Pasionaria and the Pacto de lágrimas, both directed by José María Cortina. That same year she traveled to New York where she danced at the Century Theater. In 1920 the Laietanes Gallery of Barcelona exhibited 45 of her excellent paintings on the subject of dance. The following year she began a series of trips that would take her throughout Latin America. She visited Brazil, Chile, Uruguay, México, Guatemala, El Salvador, Panama and the Dominican Republic. Between 1921 and 1930 she performed all over Latin America where she enjoyed great popularity.

Her independence, both in her art and her life was often perceived as a menace to the stability of traditional Spanish society. Tórtola had been a pioneer along with her contemporaries, Isadora 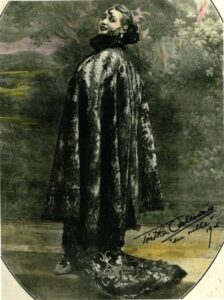 Duncan, Virginia Woolf and Sarah Bernhardt in advancing women’s liberation. She made many unorthodox choices: she became a vegetarian and advocated the abolition of the corset which constricted women’s bodies and impeded their freedom of movement. Although she was known to have taken lovers from among the intellectuals of her time she chose to remain single and lived many years of her life with another woman, Angeles Magret Vilá. We know very little about the dynamics of this relationship because Tórtola defended her right to privacy as much as her autonomy. Suddenly, at the height of her career, after performing in Venezuela, Bolivia and Cuba, with no explanation or justification, she decided to abandon the stage. She danced for the last time on November 23, 1930 in Guayaquil, Ecuador. In 1931 she declared herself Catalan and Republican and moved to Barcelona with her beloved Angeles. She was then 48 years old and above all a free woman. Tórtola dedicated the last years of her life to reading and collecting stamps. She also became a Buddhist. Tórtola died on March 15, 1955 in her home at Sarrià. She is buried in the Cemetery of Poblenou of Barcelona.